In 2018 I (Emma) was the Australian Junior Fed Cup coach. It had been a long time since last time I had been out with a junior national team. I’d taken sort of 20 Aussie junior teams away. Now all of a sudden it was kind of 10 years later. I’ve been given this opportunity to take another team away and I haven’t done it in so long.

Last time I took a team away, there were no mobile phones. Especially not on the dinner table, etc. And I thought, well, rather than come in and give all these rules and tell these 16-year-old girls, I’m the coach and you need to listen to me. We ended up doing a values session. So, we’ve got all these cards and they’re all spread out on the floor and each of the players and me. And we had one of the support percent chose three values each. Then we did a voting system and then we came up with a really funny acronym for the team.

Respect. We had to ask the Malaysian Uber drivers one question about culture each morning.

Enjoyment. We had the same playlist. We had no mobile phones at breakfast, lunch and dinner, not even on the table. And I took them overnight as well. We also visualized every morning on the top floor of the hotel just a short visualization, and we had breakfast in the morning before any other country. So, we’re always, no matter what time, whether we’re first on a second on.

when then I was caught with these certain players, what I found was that I had three different, completely different personalities.

Be careful of “Why” questions when… 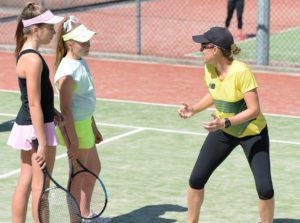