Tennis players have a very short off-season which means that players chronic workload and what they’re tolerant to is relatively high all the time because they’re having to train and compete most of the year. There’s value in understanding the players injury history in terms of informing you as a tennis coach on how many times are you going to feed in that wide forehand or full open stance backhand. How much repetition is the going to withstand? If the player has had a previous knee injury or they have some chronic knee pain through the patella. That’s something to be aware of and to count. Maybe they’ve had an abdominal strain, which is something to be aware of. Maybe they’ve had lower back pain, then the serve needs to be paid special attention to. The player might have had wrist injuries or wrist surgeries. If you’re feeding them lowballs, close to the baseline, they’re having to do a lot of wrist action to pick up that ball. That’s something to be aware of.

So, a lot of it depends on the player you have in front of you and their injury history and of what things are high risk to them. High and low load doesn’t equal for all players. Players have different histories. So, what may be a really low load or moderate load for one player without injury history is might actually be a high load for somebody else. 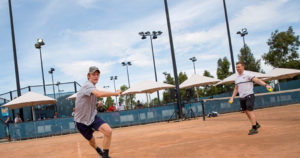